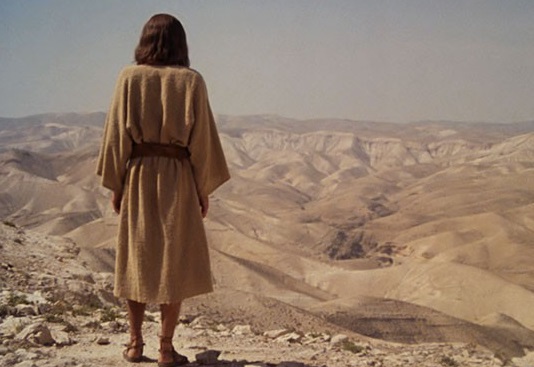 The Gospels tell us that immediately after his baptism, Jesus…

At once the Spirit sent him out into the wilderness, 13 and he was in the wilderness forty days, being tempted by Satan. He was with the wild animals, and angels attended him.

We may think it rather strange that Jesus went directly out into the wilderness for testing/tempting.  And why for 40 days?  But this is not random.  Jesus is making an astounding claim in doing this.  To see it we need to know Israelite history 1500 years before Jesus’ time.

Right after Israel’s baptism in the crossing of the Sea, …

The whole Israelite community set out from Elim and came to the Desert of Sin, which is between Elim and Sinai, on the fifteenth day of the second month after they had come out of Egypt. 2 In the desert the whole community grumbled against Moses and Aaron. 3 The Israelites said to them, “If only we had died by the Lord’s hand in Egypt! There we sat around pots of meat and ate all the food we wanted, but you have brought us out into this desert to starve this entire assembly to death.”

Immediately after their baptism they entered the desert to face testing by hunger.  And they ended up staying in the desert for 40 years!

The Lord’s anger burned against Israel and he made them wander in the wilderness forty years, until the whole generation of those who had done evil in his sight was gone.

Jesus re-takes Israel’s tests, passing on behalf of the nation

Jesus re-took this testing of Israel in the desert.  His testing in the desert for 40 days mirrored Israel’s testing for 40 years. In doing this he was symbolically claiming to represent Israel.  Notice how the tempter tested Jesus.

Then Jesus was led by the Spirit into the wilderness to be tempted by the devil. 2 After fasting forty days and forty nights, he was hungry. 3 The tempter came to him and said, “If you are the Son of God, tell these stones to become bread.”

4 Jesus answered, “It is written: ‘Man shall not live on bread alone, but on every word that comes from the mouth of God.’”

The tempter first tested Jesus with hunger right after his baptism.  How would he behave while hungry?  This was exactly the same first test Israel went through.

The second temptation was to test God’s provision.

5 Then the devil took him to the holy city and had him stand on the highest point of the temple. 6 “If you are the Son of God,” he said, “throw yourself down. For it is written:

“‘He will command his angels concerning you,
and they will lift you up in their hands,
so that you will not strike your foot against a stone.’”

7 Jesus answered him, “It is also written: ‘Do not put the Lord your God to the test.’”

In their 40 years in the desert, the nation of Israel had put God to the test many times, including: when they tested God to provide water for them at Massah, with desiring meat instead of bread, refusing to entering the land due to fear.  As Israel, Jesus now faced the same temptation, but this Israel passed the test.

Who is the devil referring to?

Notice how the devil quotes Psalm 91 to tempt Jesus.  See the complete passage from which he had quoted only a part (which is underlined).

no harm will overtake you,
no disaster will come near your tent.
11 For he will command his angels concerning you
to guard you in all your ways;
12 they will lift you up in their hands,
so that you will not strike your foot against a stone.
13 You will tread on the lion and the cobra;
you will trample the great lion and the serpent.

The Lion – Back to Jacob

Psalm 91 declared that this ‘you’ would ‘trample’ the ‘great lion’ and ‘the serpent’ (v.13 – in red). The ‘lion’ is a reference to the tribe of Judah of the Israelites. Jacob had prophesied at the dawn of the nation that:

“Judah, your brothers will praise you;
your hand will be on the neck of your enemies;
your father’s sons will bow down to you.
9 You are a lion’s cub, Judah;
you return from the prey, my son.
Like a lion he crouches and lies down,
like a lioness—who dares to rouse him?
10 The scepter will not depart from Judah,
nor the ruler’s staff from between his feet,
until he to whom it belongs shall come
and the obedience of the nations shall be his.

Jacob had stated that the tribe of Judah was like a lion from which a ‘he’ would come and that this ‘he’ would rule. Psalm 91 had continued this theme.  By declaring that ‘you’ would trample the ‘lion’, Psalm 91 said he would be the ruler of Judah.

The Serpent – Back to the Garden

Psalm 91, which the devil quoted, also stated that he would ‘trample the serpent’. This is a direct reference to the Promise in the Garden that the ‘offspring of the woman’ would crush the serpent. Let’s review it with a diagram showing the characters and their relationships in this Promise:

So the Lord God said to the serpent…

I will put enmity
between you and the woman,
and between your offspring and hers;
he will crush your head,
and you will strike his heel.”

Discussed in more detail here, God had made this Promise in the Garden, but had not filled in the details.  Now we know that ‘The Woman’ is Mary[i] because she was the only person who had an offspring without a man – she was a virgin.  Therefore her offspring, the promised ‘he’, we now see to be Jesus.  The ancient promise predicted that Jesus (the ‘he’) would crush the serpent.  Psalm 91, which Satan had quoted in tempting Jesus, had reiterated the promise with

“you will trample the great lion and the serpent.“ (v13)

The devil quoted from Psalm 91 which in turn referred to these two earlier prophecies of a coming ‘he’ that would rule and would also crush the devil.  Thus the tempter knew that the verses he quoted in the Psalms referred to the Son of God (= ruler).  The devil tempted Jesus to fulfill these promises in the wrong way.  These prophecies would be fulfilled, not by Jesus jumping off the temple to draw attention to himself, but by Jesus following the plan revealed by the preceding prophets.

The 3rd Temptation – who to worship?

8 Again, the devil took him to a very high mountain and showed him all the kingdoms of the world and their splendor. 9 “All this I will give you,” he said, “if you will bow down and worship me.”

10 Jesus said to him, “Away from me, Satan! For it is written: ‘Worship the Lord your God, and serve him only.’”

11 Then the devil left him, and angels came and attended him.

While Moses had been up Sinai Mountain for 40 days receiving the Ten Commandments, Israel began worshiping the Golden Calf.  As the Bible recounts

When the people saw that Moses was so long in coming down from the mountain, they gathered around Aaron and said, “Come, make us gods who will go before us. As for this fellow Moses who brought us up out of Egypt, we don’t know what has happened to him.”

So they proceeded to make and worship the Golden Calf.  Israel failed even before the test had begun.  In resisting this 3rd temptation Jesus re-visited that test.  And through him Israel now passed the test.

‘Christ’ means ‘anointed’ to rule so Jesus has a right to rule. Satan tempted Jesus with what was rightfully his, but Satan tempted him to take a wrong shortcut to his rule, and he was tempting Jesus to worship him to get it. Jesus resisted Satan’s temptation, by (once again) quoting from Moses.

Jesus – someone who understands us

This tempting of Jesus is crucial for us. The Bible states about Jesus:

Because he himself suffered when he was tempted, he is able to help those who are being tempted.

For we do not have a high priest who is unable to empathize with our weaknesses, but we have one who has been tempted in every way, just as we are—yet he did not sin. 16 Let us then approach God’s throne of grace with confidence, so that we may receive mercy and find grace to help us in our time of need.

We often assume we can get right with God on our own merit.  Or we trust a religious official to be our Mediator before God.  But Jesus is the High Priest who sympathizes and understands us. He helps us in our temptations precisely because he himself had been tempted – yet without sin.  And so we can have confidence before God with Jesus as our High Priest because he underwent the most difficult temptations but he never gave in and sinned. He is someone who understands us and can help us with our own temptations and sins. He is the only one spiritually qualified to be our Priest.  The question is: Will we let him?

We have seen how Jesus’ temptations were, like his birth, childhood flight, and baptism, his claim to be the fulfillment of Israel – how Israel should have developed.  His 40 days in the wilderness also patterned Moses’ 40 days without eating while he received the Ten Commandments.  Jesus patterns with Moses as well as Israel.  We look at this more in depth when Jesus begins his teaching ministry.

[i] ’The Woman’ is likewise also a reference to Israel. Israel is pictured as a woman betrothed to God (Isaiah 62:5, Ezekiel 16:32, Jeremiah 3:20) and is also pictured thus in Revelation 12.  So there are two equally valid identities to ‘the woman’ of Genesis 3:15