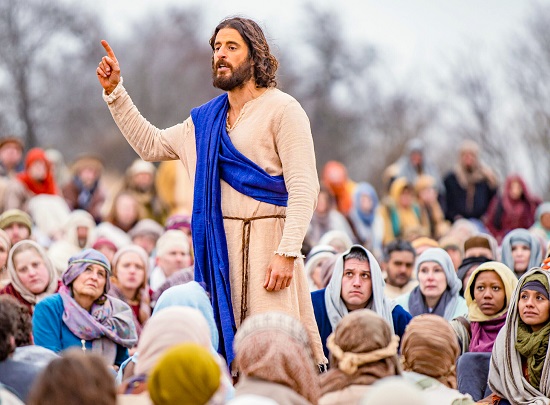 Guru (गुरु) comes from ‘Gu’ (darkness) and ‘Ru’ (light) in its original Sanskrit.  A Guru teaches to dispel the darkness of ignorance by light of true knowledge.  Speaking from the shores of Galilee, Jesus exemplified this by teaching with such impact that it would be felt even 1900 years later and far away in India through his influence on Mahatma Gandhi.

Gandhi & Jesus’ Sermon on the Mount

In England, 1900 years after Jesus’ birth, a young law student from India now known as Mahatma Gandhi (or Mohandas Karamchand Gandhi) was given a Bible.  When he read Jesus’ teachings known as the Sermon on the Mount he recounts

“the Sermon on the Mount which went straight to my heart.”

Jesus’ teaching about ‘turning the other cheek’ gave insight to Gandhi on the ancient Hindu concept of non-injury and non-killing.  Gandhi later refined this teaching into political force in Satyagraha, his use of non-violent non-cooperation with the British rulers.  Several decades of satyagraha resulted in the independence of India from Great Britain, in a largely peaceful manner.  Jesus’ teaching triggered all this.

So what was it that Jesus taught?

Jesus’ Sermon on the Mount

After Jesus’ testing by the devil he started to teach.  His longest message recorded in the Gospels is called the Sermon on the Mount. Read the complete sermon while highlights are given here. Then we look back to Moses for deeper insight.

23 “Therefore, if you are offering your gift at the altar and there remember that your brother or sister has something against you, 24 leave your gift there in front of the altar. First go and be reconciled to them; then come and offer your gift.

33 “Again, you have heard that it was said to the people long ago, ‘Do not break your oath, but fulfill to the Lord the vows you have made.’ 34 But I tell you, do not swear an oath at all: either by heaven, for it is God’s throne; 35 or by the earth, for it is his footstool; or by Jerusalem, for it is the city of the Great King. 36 And do not swear by your head, for you cannot make even one hair white or black. 37 All you need to say is simply ‘Yes’ or ‘No’; anything beyond this comes from the evil one.

38 “You have heard that it was said, ‘Eye for eye, and tooth for tooth.’ 39 But I tell you, do not resist an evil person. If anyone slaps you on the right cheek, turn to them the other cheek also. 40 And if anyone wants to sue you and take your shirt, hand over your coat as well. 41 If anyone forces you to go one mile, go with them two miles. 42 Give to the one who asks you, and do not turn away from the one who wants to borrow from you.

43 “You have heard that it was said, ‘Love your neighbor and hate your enemy.’ 44 But I tell you, love your enemies and pray for those who persecute you, 45 that you may be children of your Father in heaven. He causes his sun to rise on the evil and the good, and sends rain on the righteous and the unrighteous. 46 If you love those who love you, what reward will you get? Are not even the tax collectors doing that? 47 And if you greet only your own people, what are you doing more than others? Do not even pagans do that? 48 Be perfect, therefore, as your heavenly Father is perfect.

Sermon on the Mount reveals Authority

Jesus taught with the form “You have heard that it was said … but I tell you … ”. In this structure he quoted first from Moses, and then extended the scope of the command to inner motives, thoughts and words.  Jesus taught by taking strict commands given through Moses and made them even much more difficult to do!

But what is remarkable is the manner in which he extended the commands of Moses’ Law. He did so based on his own authority. He simply said ‘But I tell you…’ and with that he increased the scope of the command. This authority that he simply assumed was what struck his listeners.

When Jesus had finished saying these things, the crowds were amazed at his teaching, 29 because he taught as one who had authority, and not as their teachers of the law.

Jesus taught as one with great authority. Earlier Bible prophets passed messages from God to people, but here it was different. Why could Jesus teach like this? Psalm 2, where the ‘Christ’ was first foreseen as a title, described God speaking to the Christ like this

I will make the nations your inheritance,
the ends of the earth your possession.

God gave ‘the Christ’ authority over the nations, even to the ends of the earth. So as the Christ, Jesus claimed the authority to teach like he did.

The Prophet and the Sermon on the Mount

In fact, long before, Moses had predicted the coming of ‘the Prophet’, who would be unique in how he taught. Moses had written

The LORD Said …”I will raise up for them a prophet like you from among their fellow Israelites, and I will put my words in his mouth. He will tell them everything I command him. 19 I myself will call to account anyone who does not listen to my words that the prophet speaks in my name.”

In teaching as he did, Jesus exercised his authority as the Christ and fulfilled Moses’ prophecy of the coming Prophet who would teach with the authority of God’s ‘words in his mouth’. He was both The Christ and The Prophet.

In fact, Jesus meant to both draw comparison and contrast to Moses by the whole manner in which he delivered the Sermon on the Mount.  To give this Sermon …

Now when Jesus saw the crowds, he went up on a mountainside and sat down. His disciples came to him,

Why did Jesus go up the mountain?  Notice what Moses had done to receive the Ten Commandments..

The Prophet had to be like Moses, and since Moses went up the mountain to give his teaching, so did Jesus.

God’s Plan demonstrated in its Harmony and Unity

This shows a unity in thought and intent that reaches over a thousand years. Only one mind can span such an long time interval – God’s. This exhibits evidence that this is His plan. Plans originating from people conflict with that of other people. Look at the myriad of political and economic plans that contradict one another. But this plan demonstrates a unity and harmony stretching through history – an indicator that the Divine has set it in motion.

Initiating A New Era for Us

Though Jesus and Moses pattern each other in ascending the mountain, those receiving their teachings did not.  Jesus had his disciples come right up the mountain to be close to him when he sat down and taught.  But when Moses received the Ten Commandments…

the Lord said to him, “Go down and warn the people so they do not force their way through to see the Lord and many of them perish. 22 Even the priests, who approach the Lord, must consecrate themselves, or the Lord will break out against them.”

The people receiving the Ten Commandments could not go near the mountain on pain of death, but Jesus’ followers could sit right with him on the mountain when he taught. This demonstrated the dawn of a new Era, characterized by proximity to God, rather than distance from Him.  As the New Testament explains

For through him we both have access to the Father by one Spirit. 19 Consequently, you are no longer foreigners and strangers, but fellow citizens with God’s people and also members of his household,

Jesus showed in how his his listeners sat with him that the way was now opening for us to become ‘members of his household’.

But his message also explained what he expected of the ‘members of his household’.

You & me and the Sermon on the Mount

This Sermon might perplex you. How can anyone live these kinds of commands that address our hearts and our motives? What was Jesus Christ’s intent?  We can see the answer from his concluding sentence.

Be perfect, therefore, as your heavenly Father is perfect.

Notice that this is a command, not a suggestion. He required that we be perfect!

Because God is perfect and if we are to be members of his household then nothing less than perfect will do. We often think that perhaps simply more good than bad deeds – that will be sufficient. But if that were the case, and God let us join his household, we would destroy the perfection of His House and turn it into the mess that we have in this world. It is our lust, greed, anger that destroys our lives here today. If we join His Household still enslaved to that lust, greed and anger then that Household will quickly become like this world – full of problems made by us.

In fact, much of Jesus’ teaching focused on our inner hearts rather than outward ceremony.  Consider how, elsewhere, he focuses on our inward hearts.

He went on: “What comes out of a person is what defiles them. 21 For it is from within, out of a person’s heart, that evil thoughts come—sexual immorality, theft, murder, 22 adultery, greed, malice, deceit, lewdness, envy, slander, arrogance and folly. 23 All these evils come from inside and defile a person.”

A Perfect Household for us

So perfect inner purity is the required standard for His household.  God will only let the ‘perfect’ into his perfect household. But that raises a huge problem.

How will we get into this Household if we are not perfect?

The utter impossibility of us being perfect enough could cause us to despair.

But that is what he wants! When we despair of ever being good enough, when we stop trusting in our own merits then we become ‘poor in spirit’. And Jesus, in starting this whole Sermon, said:

“Blessed are the poor in spirit,
for theirs is the kingdom of heaven.

The beginning of wisdom for us is not to dismiss these teachings as not applying to us. They do! The standard is to ‘Be perfect’. As we let that standard sink in, and realize that we are not capable of it, then we may be ready to accept the help he wants to give, rather than depending on our own merit.

This is the step his teaching pushes us to take. Next, we see Jesus demonstrate the authority that his teaching had assumed.