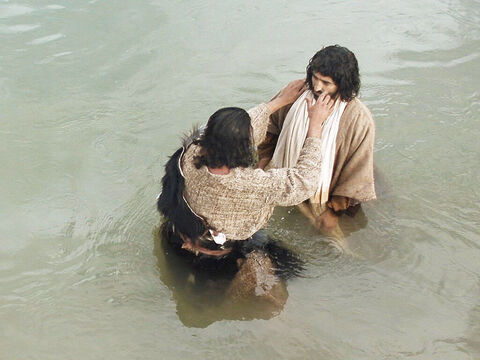 People instinctively sense that they are ‘unclean’. We know this because, while there are many differences amongst religions and traditions in the world, they all consistently invoke the need for washing with water when approaching the Divine.

Muslims practice wudu, or ritual washing, before prayer.  Hinduism practices include bathing in sacred rivers, like the Ganges – to purify oneself before sacred festivals. Buddhist monks wash themselves in water before meditating. Shinto undergo Harae, or ritual washing, before worship. Jews practice Tevilah (full body immersion in a mikveh or bath), especially before their sacred festivals. In Christendom, baptism fulfills a similar role.

The various churches practice baptism a little differently, but Jesus’ baptism by John the Baptist sets the example.

Although this receives most attention, baptism in the Bible goes back long before the time of Jesus.  The Apostle Paul writes:

“For I do not want you to be ignorant of the fact, brothers and sisters, that our ancestors were all under the cloud and that they all passed through the sea. 2 They were all baptized into Moses in the cloud and in the sea.”

We are exploring the Gospel’s portrayal of Jesus as the fulfillment, or embodiment, of Israel.  His miraculous birth paralleled that of Isaac, as well as his flight from Herod that paralleled of Jacob/Israel.  Jesus’ baptism continues the pattern.  Why did Jesus undergo baptism?  He did not need cleansing.  John the Baptist said as much when Jesus approached him for baptism, as Matthew’s Gospel records:

15 Jesus replied, “Let it be so now; it is proper for us to do this to fulfill all righteousness.” Then John consented.

16 As soon as Jesus was baptized, he went up out of the water. At that moment heaven was opened, and he saw the Spirit of God descending like a dove and alighting on him. 17 And a voice from heaven said, “This is my Son, whom I love; with him I am well pleased.”

What does ‘baptism’ mean in the Gospels?  We can answer this by noting how the Gospels use this word.  As a comment on Jewish ritual washing, Mark notes that:

Three times the word ‘wash’ appears.  In the original Greek, the first wash (in v3) is nipsōntai, the standard word for wash.  But the two other ‘wash’s in verse 4 are baptismous – baptism!  So the Jews ‘baptized’ themselves and their cups when they washed them!  Baptism simply meant to cleanse by immersion in water.

Baptism in water not the issue

Though many view baptism with water in Christendom as being able to cleanse us the New Testament explains the active source of our cleansing.

18 For Christ also suffered once for sins, the righteous for the unrighteous, to bring you to God. He was put to death in the body but made alive in the Spirit. 19 After being made alive, he went and made proclamation to the imprisoned spirits— 20 to those who were disobedient long ago when God waited patiently in the days of Noah while the ark was being built. In it only a few people, eight in all, were saved through water, 21 and this water symbolizes baptism that now saves you also—not the removal of dirt from the body but the pledge of a clear conscience toward God.  It saves you by the resurrection of Jesus Christ, 22 who has gone into heaven and is at God’s right hand—with angels, authorities and powers in submission to him.

Here it clarifies that the ‘removal of dirt from the body’, that is a ritual physical washing of some sort, is not the baptism that saves.  Rather it is the ‘pledge of a clear conscience toward God’ – the inner repentance that John the Baptist taught – that saves.  It saves us as verse 18 explains because it is Jesus himself who is righteous (spiritually clean) so that he brings us to God through his death and resurrection, explored more fully here.

In fact, we need baptism, not in water, but into Jesus himself, as the Bible explains

Or don’t you know that all of us who were baptized into Christ Jesus were baptized into his death? 4 We were therefore buried with him through baptism into death in order that, just as Christ was raised from the dead through the glory of the Father, we too may live a new life.

In trusting Jesus he washes us and thus we can ‘live a new life’.

That ‘new life’ involves an ability to have victory over temptation and sin.  Jesus shows exactly how he does this in what he went through immediately after his baptism. He went into the desert for 40 days for testing by the devil, once again patterning as Israel which had undergone testings for 40 years in the desert immediately after their baptism from Moses.